A/N: As stated in my disclaimer on the right, this blog includes adult content, including sexual content. This is one of those posts.

Eli took a deep breath and knocked on the door. The woman he met on SimMatch, Sasha (was that her name?) answered the door. She didn’t look much like her picture. She wasn’t at all as attractive as the bogus picture either. Well shit. “Er, Sasha?”

“Oh no, that’s my sister. Hold on. Sash, that hunk from that dating site is here!”

Eli stifled a snicker. She may not look attractive, but this sister was pretty damn funny.

“Milly!” Sasha, the woman that did look like that picture he saw online came running to the door, glaring at her sister. “Get lost.” 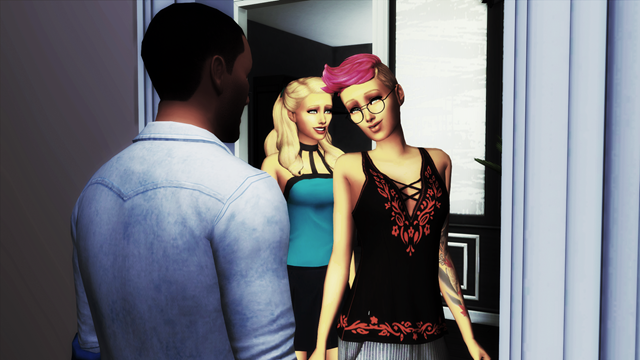 “Whatev’s. But if she doesn’t work out, I call seconds.” Milly winked at Eli. “Or thirds.”

Eli had to bite down on his lip, he was trying really hard not to laugh. If things didn’t go well with Sasha, he might have to take her up on that, even if it was just for a good laugh and a couple of drinks.

When Milly disappeared, Sasha, who bore a bright red blush on her cheeks smiled over to Eli. “Sorry about Mills. She doesn’t understand when to keep her mouth closed.”

Eli shrugged. “Not to worry. She’s kind of fun.”

“She can be,” Sasha smirked, “And she can also be annoying as hell.”

“I get that. I have a younger sister too; she’s annoying, and a pain in the ass.” Eli held out his arm, “You ready to go?” When Sasha took his arm, he led her away from the apartment and to the elevator. Eli wasn’t counting on this date to last. In fact, he was pretty sure this date was going to be like all the others. Milly might be someone he could take out to drinks, but already, he wasn’t feeling the connection with Sasha. 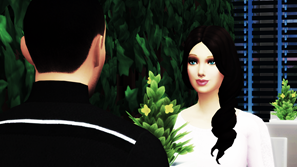 For the past year or close to a year, Eli had been going out on dates. At first it was Marv and Mom hooking him up with women all over San Myshuno. Then it was Aaron who tried his hand at match-maker. That didn’t go over well. 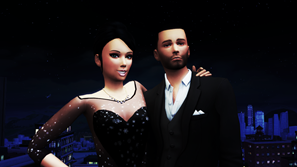 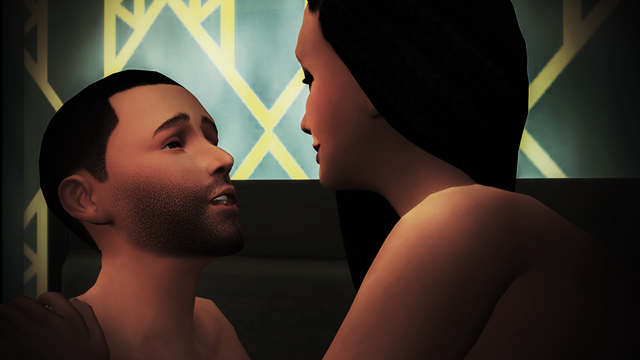 To be fair, Eli wasn’t trying too hard. He knew who he wanted, and he craved to hear Sam’s laughter again, to see her smile, to feel her lips on his, and to smell that sweet aroma that was just pure strawberries and Sam.

Sasha didn’t smell like strawberries. Her laughter at the festival was torture on his ears. Her smile may brighten someone’s day, it didn’t brighten his. She seemed genuine and nice, which was a plus. He met a couple of real bitchy girls already, and hated them.

When they returned to her apartment, she smiled that same smile Eli was used to. “This was…fun.”

He almost chuckled. “I guess.”

He gave a one arm shrug.

“Yeah, me neither. But thanks for the date, and the chat. Sometimes it’s nice to get out and socialize, you know?”

She waved him off. “Please, at least you’re nice to look at and don’t smell like rotten fish. The last guy,” she snorted and composed herself, “Man, he was trying too hard and smelled like he worked the docks twenty-four-seven. It was so gross when he tried to kiss me.”

Eli made a face. “Yeah, that doesn’t sound appealing. And you’re pretty too. Definitely a lot better looking than some of those women I’ve met that used Google Images in place of their profile pic.”

She winced, “Yikes. Can we say desperate?” They both laughed and Eli shook her hand at the end of the conversation. “It was nice, Eli. Thank you.”

And that was it between them. That was easy. That was one of the easiest breaks he had in the last year. He headed back to his apartment where he checked-in just before nine—an hour before curfew—and headed upstairs. He still lived in the crappy apartment, and still followed all the rules. He wanted out of the half-way house, but until he had the money, he couldn’t afford rent anywhere else in San Myshuno.

In the morning he patted Marv as he came into work. “Hey, man.”

Eli shrugged. “Okay. Better than that bitch from Roaring Heights, but not as great as that hot chick from Uptown.”

Marv snickered, “Dude, you and that Uptown girl. Why haven’t you called her back?”

Eli shrugged. “Because it’s not just about the sex. I mean, yeah, the sex was fucking awesome, and what she could do with her mouth…” Eli grinned at the memory again. Yeah, that had been the best date in a long fucking time.

“Better than….you know…” He knew who Marv was talking about. Marv had always tried to stay away from the subject, and Eli was thankful for it. If Marv did try to talk about her it was more of “she-must-not-be-name” type of situation. Sam wasn’t Voldemort, but he sure enjoyed the way Marv spoke to him as if she were.

“I know. So, was Uptown better than her?”

He shook his head, “Dude, no one’s better than Sam.”

Eli laughed. “Yeah, okay, and what am I supposed to do with a girl like her the rest of the day? She’s hot, and great in bed, but she wasn’t that interesting outside of it. If I want a hook-up, I’ll call her. Right now, I’m just trying to find a real girlfriend again. Not some hot ass.”

“And last night’s girl wasn’t it?”

“Sorry, man. Any other girls pique your interest on that app of yours?” 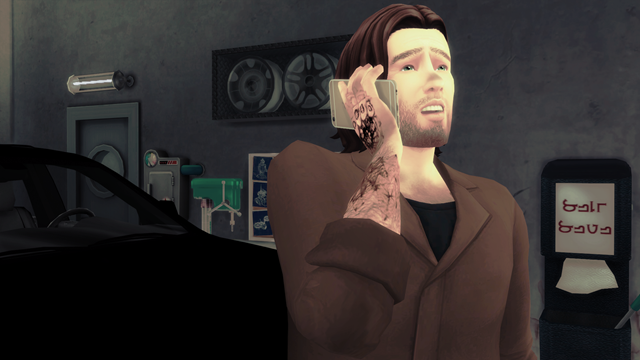 The two worked for most of the morning and into the afternoon. Marv’s phone went off at some point, and he answered. “Ah shit,” he exclaimed. “No…no…I totally did not forget. I’m-I’m on my way right now, baby.”

Eli held back the laughter. Marv forgot something, and Eli was pretty sure with Nikki’s hormones raging on that it wasn’t something good. He could not believe Marv was about to be a father again.

At that thought, Eli’s smile and laughter faltered. He didn’t try to think about Sam most days. It was always hard, but it was harder to think about his child out there, somewhere, without him in it. Would the kid be okay without Eli? Would they eventually have a step-father they could call dad? Eli could only hope Sam would find someone special someday for his kid’s sake. If anything he didn’t want his kid to end up like him—fatherless and an ex-thug.

Marv hung up. “I gotta run. I totally forgot Nikki’s ultrasound appointment. She is flipping the fuck out.” 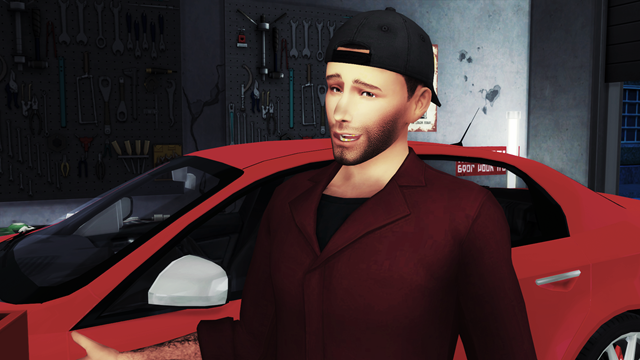 “Dude,” Eli laughed—he couldn’t help it. “That’s not something you should be forgetting. Don’t you find out if the baby’s a boy or girl today?”

Marv grinned over to him. “Five bucks it’s a boy.”

“Ten. You know you want another girl to spoil.” 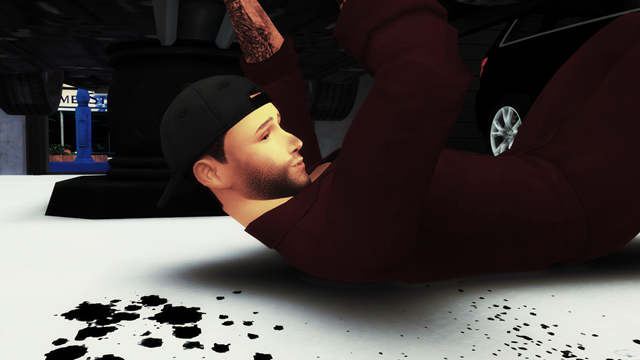 Eli went back to work, and kept working for the longest time. It was getting close to closing when he heard the voice of the angel-past call out. “Hello?”

Eli froze. Okay, that was not in his head. Was that…No, but it couldn’t be. Why would she come here? Out of all the places in San Myshuno why would Sam travel all the way here to see Marv? She wouldn’t. Would she?

Eli dropped the tool almost on his head. “Shit,” he swore. “Fucking hell.” He pulled out from under the car and stood. He headed to the door and checked the small window and spotted her. Spotted the woman that made his heart, even now, race and his blood pool downward. He ached to see her for over a year, and here she was. But why now?  Why, after all this time did she come back?

She wasn’t alone, Eli noticed. On the counter was a small car seat, and that was definitely the sound of a baby crying. My baby. Eli’s heart ached and then soared. He wasn’t sure what to think about Sam dropping back into his life, especially since he had been trying so hard to move on. Yet, he wasn’t going to ignore that baby. And he sure as shit wasn’t going to hide from Sam. Not now, not ever. She just better have a good fucking excuse dropping in on him like this. His heart wouldn’t be able to take it if she didn’t.