Warning: NSFW photos – You have been warned. 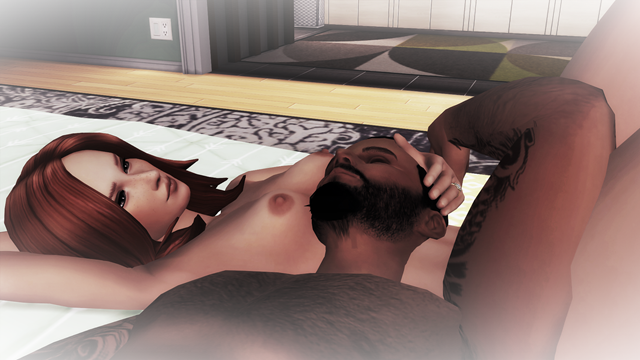 Eli chuckled as he relaxed in Sam’s arms. He was trying to catch his breath. His eyes met Sam’s. God, she was so gorgeous in that post-fuck afterglow. “Damn, Sam, don’t know what I did to deserve that, but I love you for it.”

“The kids are gone, and you’re home. Perfect time.”

She leaned over to kiss him, and he pulled her around the bed and on top of him. Round two, don’t mind if I do. Eli took Sam and devoured her sweet kisses. Fuck, but she was hot and sexy, and all he wanted was her in his bed forever.

“Yes!” Something Eli loved to hear come from her lips. “Yes, Eli! Yes. Fuck me, harder!”

He closed his eyes as the closer he got to his own impending climax. He gave her everything he had.

“Eli, open your eyes.”  What the fuck? Why did Sam’s voice change? Why the fuck was it…

He opened his eyes to see…was that Anthony?

“Please, bro. Come on. Wake up, man.” It was definitely Anthony.

He blinked, and blinked again. Pain raced through his body, replacing the euphoria he was imagining in his head. “Fuuuuuuck!” he shouted.

“Shh. Calm down, Eli,” Anthony said and held him against the bed as he arched his back. The pain, oh fuck, but the pain was immeasurable!

“Eli, come on. You can’t move like that. You’ll tear your stitches.”

Eli lifted his arms to try and grab his stomach, but he felt tension and then Anthony grabbed his wrists. “No. Hands to the side.”

Like he could move them much anyway, they were fucking tied down or something.

“What’s going on?” he cried, just as something soothing started to coarse through his system. “Where the fuck am I?”

“You’re in the hospital,” a woman answered on the other side of him. She gave him a smile. “That should help with the pain. I’ll go see if I can’t find the doctor, Sir.” This time she was speaking over to Anthony.

Eli met his brother’s eyes. Fuck, but what the fuck happened to his face? “You look like shit,” Eli blurted out.

Anthony smirked. “You should see a mirror.”

“What happened?” Eli couldn’t remember anything. Last thing he remembered was…the riot? Fuck, but there was a riot. “The riot? What happened?”

“I was hoping you’d tell me. I found you in a pool of blood.” Now, it came to him. Eun. “That fucking cock sucking asshole! I’m going to kill that mother-fucker!”

Again, Anthony held him down. Tighter this time. Not like Eli could go anywhere. He was definitely restrained. Fucking hell.

“None of that, inmate. I don’t want to have to write you up, or send you to the SHU when you get back.” “Why the fuck am I restrained?”

Anthony rolled his eyes. “Because you’re still an inmate and a ward of the state. Now, who are we talking about? Who stabbed you?”

“Because you’re my fucking brother, that’s why. I got permission from the Warden to be here.” He glanced over to the door. “And there are four other anxious people that want to see you, and if you can hold yourself in check, I might just see what I can do. So none of this threatening other inmates. Got it?” 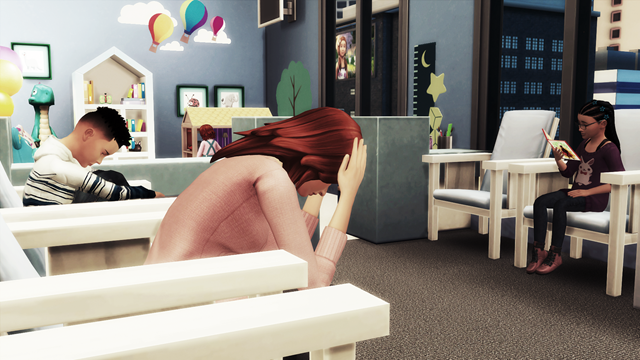 “They’re here?” His heart monitor betrayed him. If there was anything he wanted in that moment, it was his family.

Eli nodded. He took a breath, and winced. The pain in his side reminded him that he was not to do that again. “How’d I get here?”

Anthony pulled a chair over and sat down. He spoke to Eli. “When I got to you, you were barely conscience. I went to drag you off, when that big inmate, Kellogg spotted us. He helped me get you to a cell. He gave me a pair of prison bottoms, and hid my uniform.

“Another inmate tried keeping you alive. That cook. At one point your heart stopped, but Kellogg, he saved you. Then we heard the SWAT team.

“When the dust settled, I grabbed a couple of paramedics, showed off my ID and badge to SWAT, and they brought us both here. I didn’t even know that I was even injured.”

Anthony helped him sip some water. “You’ve been out for days.”

“Let me check with the Warden. There’s two C.O.s outside your door, by the way.” He eyed Eli’s restrained hands. “Not like you’re going anywhere. But let me find out if I can get them to see you.”

Before Anthony made it to the door, Eli spoke again, “And Mom? Does she know?”

Anthony nodded. “She’s outside too. So is Ryha and Aaron. Grant’s still dealing with the aftermath of the riot, but he does stop by when he can.”

Anthony smirked. “Yup. He flew in yesterday. I’ll be back, okay?”

Eli nodded and closed his eyes just as Anthony left the room. He woke to voices after a bit, this time more than two of them. He recognized some, but not all the voices. 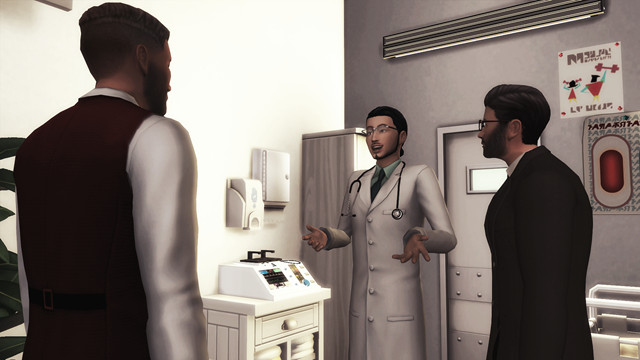 His eyes adjusted to the light and he noticed a man in a white lab coat, Anthony, Grant and…fuck, the Warden. “…damage…full recovery…about two days.”

“Thank you, Doctor,” the Warden said, and the doctor left.

“What—” but Eli was cut off as pain laced through him again. “Fucking hell!”

Anthony did something on some monitor or thing, and that weird soothing feeling came back. “I got you covered, inmate.”

“No thanks to you,” Eli said, then glanced over to Grant. “What the fuck you doing here?”

Grant snorted. “My daughter is camped outside this room and refuses to leave. Something about her husband being almost killed, and she refuses to leave until she sees him.” He shook his head. “I’m here in official capacity too. I’m with the Warden to oversee the inmate transportation back to the prison. You weren’t the only one injured, Elijah.” “Can I see her?” Eli asked and then asked the Warden again, begging almost. “Please, sir. May I see my wife?”

“As long as these two stay in here, and another C.O. I think I can allow it. You rest up though, and I’ll see you back at the prison in a few days. We have to get you healthy enough to parole you out, inmate.”

“I’ll go get Sam,” Grant said and followed the Warden out of the room. 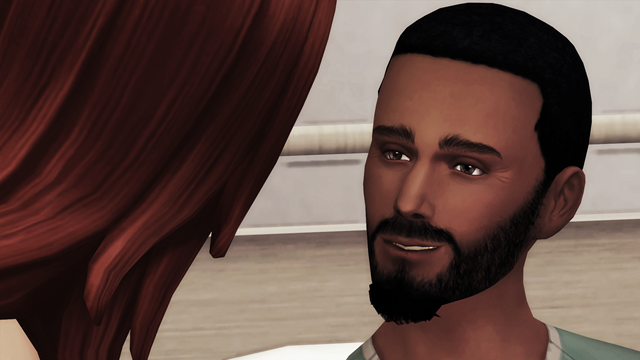 Sam’s breath hitch at the sight of Eli. He was more of a mess than Anthony. Yet, the moment his eyes locked onto hers, Eli’s grin that made Sam’s heart flutter spread across his face. “Hey gorgeous.”

“Eli,” she cried and rushed his side. She wasn’t sure if she was allowed to kiss him or touch him. She brushed his cheek, noticing that stupid beard was still there. “You haven’t shaved this off yet?”

Eli laughed and then hissed. “Ow. Don’t make me laugh.” 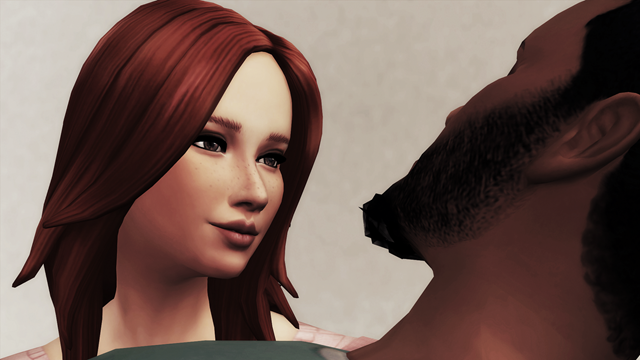 Sam took his hand and held it as she sat. She dared her brother-in-law and father to say something right then. But they didn’t. They both kept their distances away along with the other prison guard. “Are you okay?”

“I am now that you’re here.” He was such a charmer, even while in the hospital. “How’s the kids? They’re not worried, are they?”

“Derek’s been freaking out the most. He thinks you’re being held hostage despite what Dad and I keep telling him. Bailee just wants her daddy, but your mother’s keeping her busy with books. Dakota doesn’t really understand what’s going on. She just wants to play.”

Eli gave her soft nod. “I wish I could see them.” He squeezed her hand. “I’m just glad you’re here. I love you so much. I kept dreaming about you.” He yawned and closed his eyes. “I love you.”

Sam stood and bent over to kiss his cheek, not missing the fact that Anthony took a guarded step toward her. “You rest. We need you to get better so you can come home. We’re all waiting for you.”

“I love you.” His mumbles were barely coherent.

“I love you too.” With that Sam released Eli’s hand and left. His eyes closed, and it wasn’t until she was out of the room that she broke down and cried.

“He lost a lot of blood. You heard the doctors, he just needs time to recover now.”

Sam nodded into her father’s chest. “I know. I just want to be there with him through this.”

“I wish we could allow that, I do, but there are rules. It’s for both his and your safety.”

Sam understood that. There was a manhunt going on in the city for an escapee, and the hospital was on high alert due to some of the prison population being treated there. Eli, as it turned out, was on a list that they found inside the escapee’s prison cell. He was given even higher security than the rest of the inmates at the hospital.

“What about when he gets transferred back? What then?”

“The Warden has assured me he’ll be placed in protective custody. He only has two more months, Sam. He’ll be fine.”

She hoped Dad was telling the truth. Eli needed to get through two more months. For her, it wouldn’t be long, but she knew that in prison it was still a lifetime, and every day he was in there was a risk.