“This isn’t fucking fair!” Derek shouted after tossing his phone into a box that was on his desk. Inside already sat his tablet and his laptop. Not to mention his Cube One and the few games that were there. Dad already removed the TV from Derek’s room.

“Language, Derek,” Dad warned. “And if it was fair, it wouldn’t be called a punishment.”

“But this is bullshit!” Derek shouted and kicked his desk. “Do you want me to add time to your sentence? You’re already on thin ice with Mom and I as it is. Don’t push me, Derek. I told you if you didn’t get your grades up, you’d lose your privileges and you’d be put on restriction. We’ve warned you all semester long about this. And after last month, I told you exactly what would happen if you didn’t show me the grades we talked about with your teachers. You had a chance, and you blew it.”

“You have plans, plans that involve summer school. Nothing else. Until I see some better grades, your life involves going to school and coming home. Say goodbye to whatever social life you thought you had, because it’s over until I say so.”

“Good.” Dad took the box out, and Derek cursed. This was so fucked up! He sat on his bed and buried his head in his hands. What the hell was he supposed to do? He had plans this summer. He was hoping to do some ride-alongs, and maybe even get into some kind of internship in training K-9s.

He stood and paced. He really wanted to get into that internship. It sounded so cool to work with K-9s and help train them.

“Fucking Olivia Godfrey,” he hissed. It was her fault. Olivia was a fucking bitch, and ratted him out about the cheating. Brandt and him had both been caught and suspended a month ago for cheating, and it was Olivia that figured it out. And because Olivia was a fucking perfect student with perfect grades, she just had to go and snitch on him and Brandt. 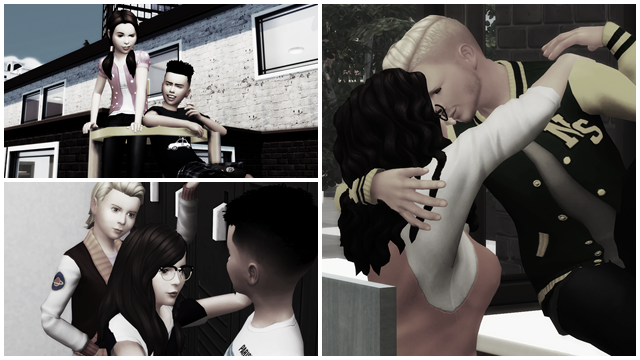 It hadn’t always been like that. Olivia had been cool, and one of Derek’s best friends.  They did a ton of stuff together growing up. Their dads were best of friends, so naturally they were friends.

Then Junior High happened. Olivia started to get totally serious about school. She would mock Derek for getting stuff on his homework wrong. She’d tease him whenever he didn’t know an answer in class. She bullied him along with Lucas Munch. It hurt.

It got worse when she started to date Lucas Munch this year. He was the JV team’s quarterback, the Class President, and the most popular kid in their class. He was also Derek’s sworn enemy.

The fist fight earlier this year Derek got into was when he noticed Lucas’ arm over Olivia’s shoulder. Derek called Olivia a traitor. She called him a loser that wouldn’t amount to anything.

“Face it, dumbass, we all know where you’re going to end up next,” Olivia sneered. “I mean, you are your father’s son, right?”

He could not believe she tossed that shit at him. “You’re one to talk about fathers. Yours is just as innocent as mine. So, fuck you, you bitch.”

After a short fight with Lucas that landed him with a suspension, Derek refused to even glance in his ex-friend’s direction. He hated her.

He hated her more now that she totally ruined his chances to get into the internship program. He needed passing grades. He needed those test scores to stand. 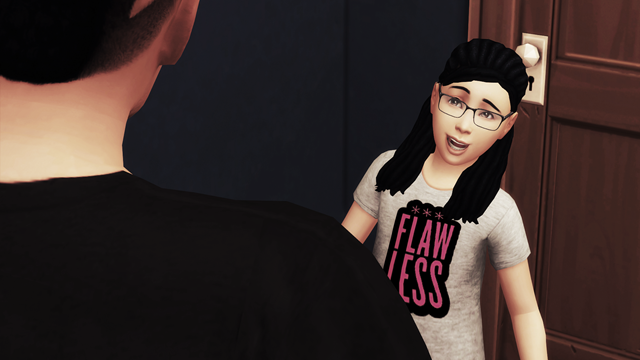 The door opened and he turned to see Bailee there, shaking her head and grinning a little. “Man, Ric, you really know how to screw up.”

“Shut up.” He walked over to her. “And get out of my room. What the hell, don’t you ever freaking knock?”

She laughed and waved him off. He slammed the door. 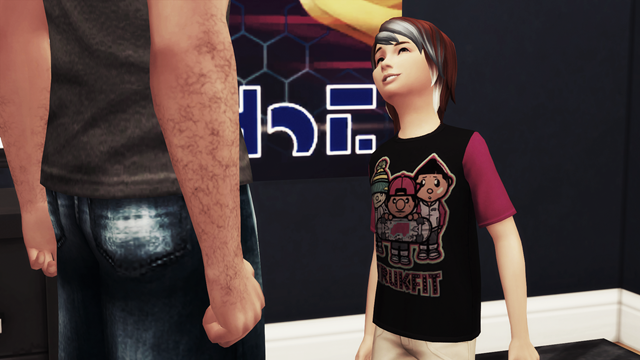 Of course, he was not alone for long. Dakota waltzed right into his room. Did no one in this family know how to knock? “Ric? Will you play with me?”

“Can’t you see I’m too busy being pissed off?”

Her eyes widen. “You swore. That’s not allowed.”

He rolled his eyes. “And let me guess, you’re going to run and tell Mom and Dad?”

“If you don’t play with me, I will.” She crossed her arms. “Play with me, and I won’t tell them you said a bad word.”

Derek froze. The brat knew how to fight dirty. He was sure he’d get into more trouble if they learned he swore in front of Dakota. Dad had been on his ass about the language too. Derek just didn’t have a filter anymore.

Dakota grinned as if she won a prize. He followed her out to the living room. She handed him the Lego pamphlet of what they were going to build. It was actually pretty cool space ship from Invaders From Mars.

He noticed Mom on the phone in the living room. He had no idea who she was talking to, but it appeared to be a serious conversation. He couldn’t tell what she was saying because Dakota was talking over her next to him.

“Can’t you stop talking for one minute, Brat?”

Derek sighed. He turned to see his mother’s eyes on him, narrowing at him. 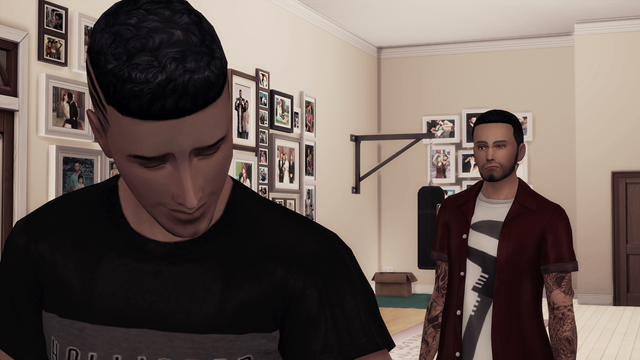 Dad though was the one that spoke, and he came from behind. “Derek, be nice to your sister.”

“But she is totally being a brat.”

Screw this. He headed for the door. He was so not staying there. 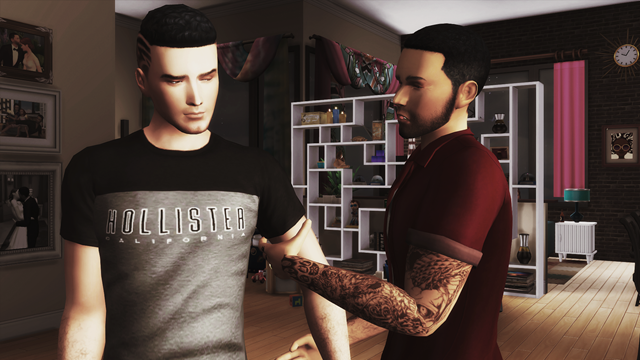 “Where the hell do you think you’re going?” Dad shouted, grabbing his arm.

“Out.” Derek pulled away from his dad.

Dad shook his head. He was not happy. In fact, he looked more pissed off than he did when he came into Derek’s room to grab his stuff. “Not happening. You’re grounded, and that means no leaving the apartment.” 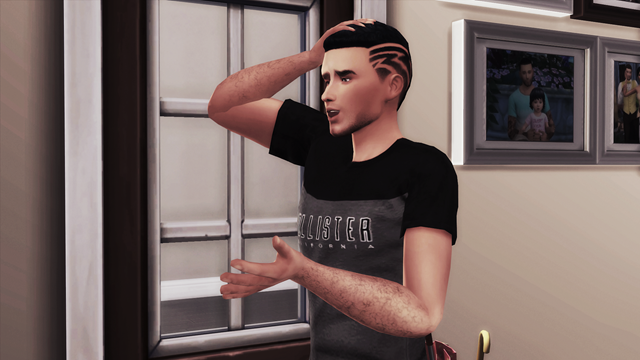 Derek wanted to scream. “Why can’t I just live my life? I had serious plans this summer. And you are totally fu—screwing them up!”

“No, you screwed them up by half-assing it most of the year and then cheating on a bunch of tests. You’re lucky that they didn’t throw you out of school last month, and that you can make up those credits over the summer.”

“But I don’t want to go to school over the summer! I want to intern with the K-9 Unit.” 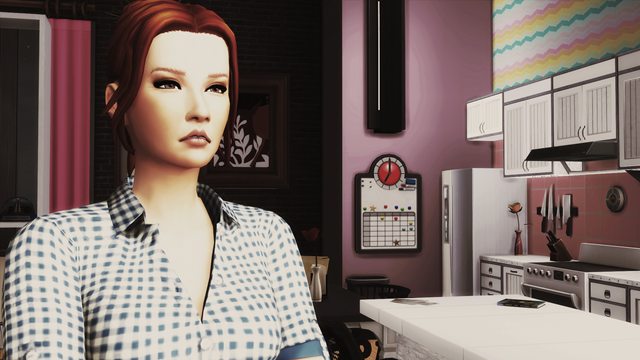 Mom finally spoke up. She was off the phone. “That’s not going to happen. And your ride-alongs have also been cancelled.”

“What!” Derek could not believe this. He knew that it was a possibility, but to hear it be confirmed…how could his parents do this to him?

“After talking to grandpa, he’s going to  cancel your ride-along sessions,” Mom explained. “He’s not happy about your grades either, Derek.” 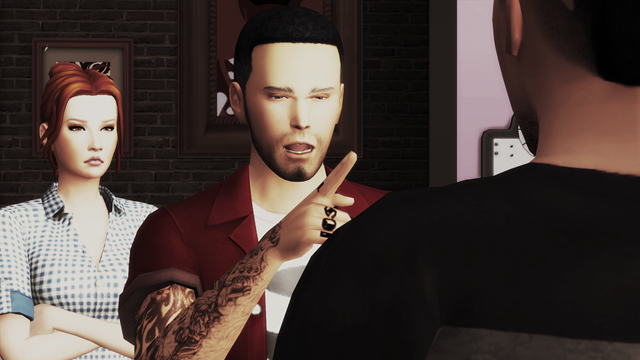 “What did you think would happen?” Dad asked. “Did you really think we’d let you do whatever the hell you want and not care? This isn’t new news, Derek. We’ve always expected better grades than what we saw on that report. That hasn’t changed this year.

“What has changed, though, is your attitude. And Mom and I are sick of this life is out to get me bullshit. You make your own choices, Derek. Not me. Not Mom. Not Olivia.”

Derek was fuming. “She screwed me over!”

“No, you screwed yourself over.”

“She ratted me out.” Derek was getting even more pissed off. “You’d think the same thing if you were in my shoes! If…if…if your best friend knew about you robbing liquor stores and then ratted you out to the cops.”

“You may be right, but it was my choice to do the crime, just like it was your choice to cheat on those tests. Now it’s time to pay the piper, son.”

Derek stormed to his room and slammed the door. Olivia could go fuck herself. In fact, they all could.