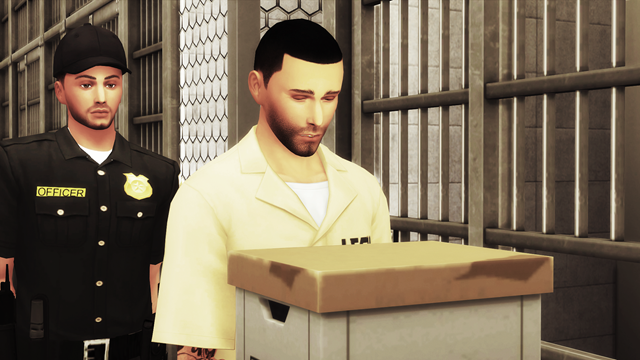 Eli carried the box containing the stuff he needed to survive the first couple of weeks in prison and was led by his own fucking brother to his new home. Anthony said shit to him and Eli didn’t say anything back. How the fuck was he supposed to do this with Anthony as a CO? It was bad enough during the first ten years being alone in prison, now he had this CO that was probably going to be permanent attached to him or some shit. END_OF_DOCUMENT_TOKEN_TO_BE_REPLACED

Eli slammed the door and slid down the wall. His hands were still shaking. His bloody knuckles made him sick. He smacked his head on the wall. “Stupid, stupid, stupid.” He should have never punched out that asshole—even though he had it coming. He really had it coming.

The entire night had been a huge mistake. Eli should have not gone out with his friends. He should have headed straight home, and just spent the night with his family. “I’m so fucked,” he whispered. Eight years down, and he was so fucking close!

END_OF_DOCUMENT_TOKEN_TO_BE_REPLACED

“There ya go, your bed is finally built. What do you think?” Eli asked his son. Derek and him had spent all afternoon putting together the new bed. He had outgrown his old toddler bed, and now that he was almost seven years old, it was time for a new one. Of course Derek picked out his bed: a police car. Sam thought Eli’s reaction was hilarious. At least Derek didn’t see his scowl. In the end though, it did go with the police-themed room that Derek had been going for. Grant sure did spoil his grandson, that was for sure. END_OF_DOCUMENT_TOKEN_TO_BE_REPLACED

“Get back here, Derek!” Eli took after his four year old running down the hallway, dripping wet. Eli was also dripping wet thanks to Derek splashing around and screaming that he didn’t want a bath.

The door opened just as Derek sped passed it. Grant quickly grabbed him, and Eli was thankful for the save. He did not want to mop up the entire house or dry off any more furniture.

The car ride was uncomfortable. Neither of the men said a word to each other. Eli was afraid to say another word. He didn’t want to rock the boat anymore than they already had this week.

Anthony pulled into the parking structure to the apartment building, and they both silently made their way to Eli’s apartment.

END_OF_DOCUMENT_TOKEN_TO_BE_REPLACED

Anthony pretended he was okay with this poker game that he was hosting the next day. He tried to hide his own emotions around the inmates and even his co-workers. No one was the wiser that he just wanted to end the poker game, and try to get Eli and Sam back to being that gag-worthy couple they were before he opened his big fat mouth.

Of course, he said nothing. All the guys at work talked about it non-stop about the game. They were looking forward to playing cards, and seeing where Anthony lived.

Anthony headed home less than thrilled about the next day. His co-workers had no idea who Eli was, or if they did, they never mentioned it to him. They just wanted to play, and Anthony wanted the comradery between his co-workers. How else was he supposed to make friends? Join the bowling league? Fuck that. Poker was something he understood. Both Eli and him learned from the best—their mother.

END_OF_DOCUMENT_TOKEN_TO_BE_REPLACED 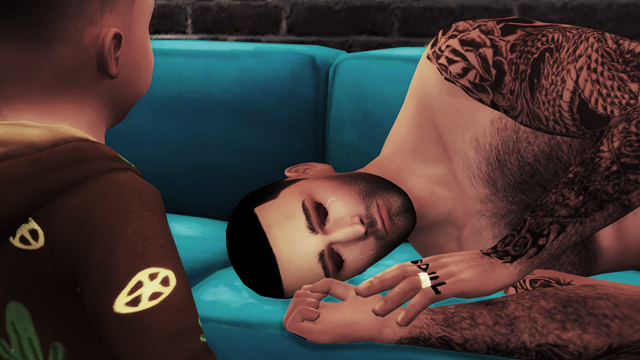 Eli woke to Derek poking him in the face. He opened one eye to see his son poking at him. “What’re you doing up?” he whispered.

Eli checked his cell to see that it was barely six in the morning, and he didn’t have to get up for another hour. He sat up, wiped his eyes from the dried tears he fell asleep to, and plopped Derek onto his lap. “You should be sleeping.”

END_OF_DOCUMENT_TOKEN_TO_BE_REPLACED

Eli opened the door and smiled at his brother, Anthony. “Hey man!” He pulled his brother into a one arm hug.

Anthony backed away. “You really sure this is okay?”

“Dude, we’re family. It’s what we do.” Eli couldn’t even imagine what Anthony was going through. His brother called a week ago asking if he could stay with Eli and Sam after discovering his wife of almost a year had left him, and had been cheating on him since before they were married.

END_OF_DOCUMENT_TOKEN_TO_BE_REPLACED

Eli couldn’t stop grinning or jumping up and down like a little kid in the bathroom. He kept staring at the stick that Sam just pissed on, waiting for what he knew to be true.

Sam laughed at him, “Calm down, Eli.”

“No way. It’s going to be positive, just like the last two.”

And sure enough it was. “Sam, we’re having a baby!”

END_OF_DOCUMENT_TOKEN_TO_BE_REPLACED

Eli brushed some hair off of Sam’s shoulder and kissed her there, right on the nape of her neck, and whispered in her ear, “I love you, Mrs. Ryder.”